The Deep Message Within The Rescue of a Kitten

There was this one day, I went outside in my backyard, and discovered that my shed doors were blown open from a recent windy storm, with one side door being detached and having fallen inside the shed slightly. As I attempted to straighten the doors, I suddenly screeched out in excitement, (scaring my boyfriend half to death lol). There, laying in the corner of my broken shed, were 2 tiny kittens. They were cuddled up with each other, staring at me. 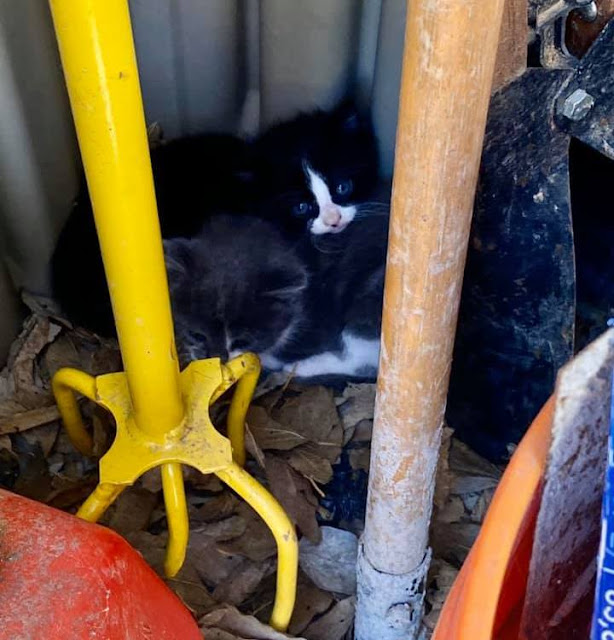 I wish I had just grabbed both of them up in that moment to rescue them, but I didn't. My boyfriend and I decided to leave them alone and go to the gym for an hour. Unfortunately, in that one hour period, Mother Cat had frantically moved her discovered kittens to behind a different shed in my back yard, far behind in the center where they couldn't be reached. My boyfriend and I ended up buying them food and feeding them, up until Mother Cat moved them again, and we weren't sure where they went.

(This photo was taken by my boyfriend's camera that he set up to secretly film the cat family while we fed them): 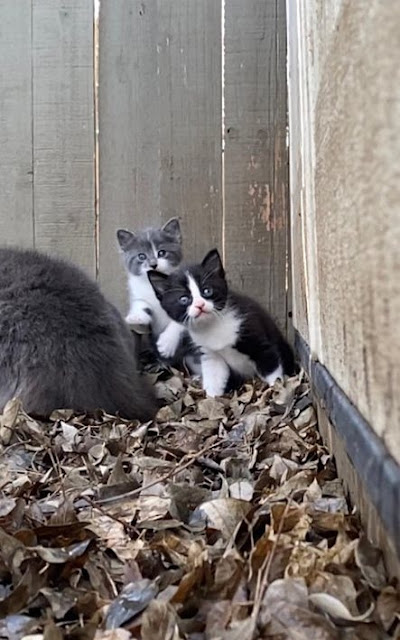 A few days went by, but I continued to seek all around my house for the cat family, to no avail. Eventually I spotted Mother Cat in my back yard, eating some meat leftovers I'd thrown out there on purpose.

Then about a week after Mother Cat had moved them out of my yard, I was sitting at my laptop, and I heard a very loud, "MEW!!! MEW!!!! MEW!!!!!" Over and over. I knew it was the sound of a kitten screeching for help. I ran out into my back yard, and realized that the mews were coming from behind my fence, so I climbed up on a ledge to peered over into my neighbor's yard, and saw the black and white kitten frantically running around along the side of the fence, alone. It appeared that it was looking for it's Mother, and was very scared and forlorn.

I hopped into my car, and hauled-ass around my neighborhood to the block of homes directly behind my house, and found the home with the yard where the kitten was. I rang the doorbell, and knocked, but clearly no one was home; they were at work. I went to their gate, and could see the kitten was just inside their yard's gate. I didn't want to trespass, but I really wanted to help and rescue the kitten. Luckily, the gate was unlocked, and I was able to step inside just a couple of feet to rescue the kitten.

Oh man, that little kitten was mad as hell at me, and scared shitless! It hissed and growled and swatted at me violently. I incurred 2 good, deep scratches from those tiny paws!

I scurried to my car and put the kitten on the passenger floorboard gently. When I got home, I was able to get the kitten safely into a cat carrier that I had stored in my garage: 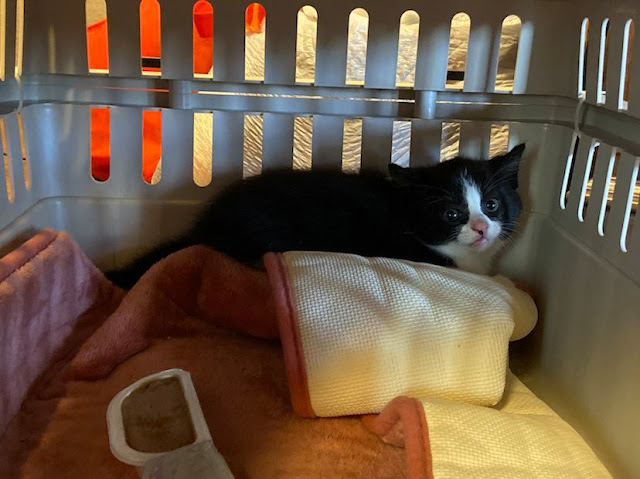 You could tell she was scared & pissed by the look on her face!

The kitten was trembling with fear in the carrier. When I'd even attempt to get close or reach in the carrier to give her food and water, she'd hiss and swat at me. I felt sad that she hated me, but I had hopes for her to have a good future somehow.

I had posted about the kittens from my shed on my Facebook page, and my friend Tiffany had contacted me, saying that she and her husband had actually been praying for a new kitten to add to their family, as a play friend to their other young black male cat named Echo. So I called Tiffany right away and let her know that I'd managed to capture one of the stray kittens. Tiffany came within a few hours after she got off of work to pick up her new kitten! So the kitten ended up in a loving happy home, with a playmate and two humans that would love her! It was a win-win situation all around. I told Tiffany that the kitten was a wild, feisty, scratchy one and that they should probably wear some hefty gloves when handling her at first for awhile! Tiffany named her new kitten Ellie. 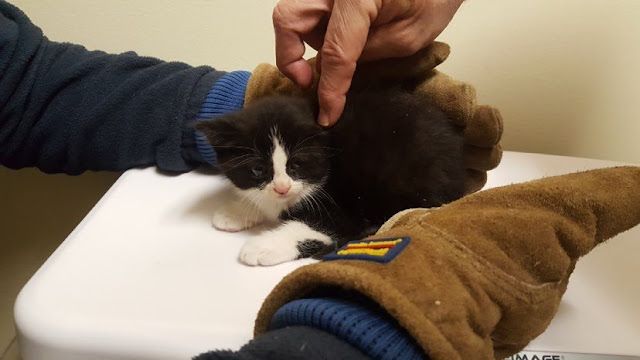 First night at her new home with Tiffany! She wasn't too happy...

After awhile, the adorable little kitten got comfortable with her new home and family, and began to settle-in. I was so happy that Tiffany would send me updates on her progress. I never saw Mother Cat or the other little grey kitten again. But at least I got to save one of them. 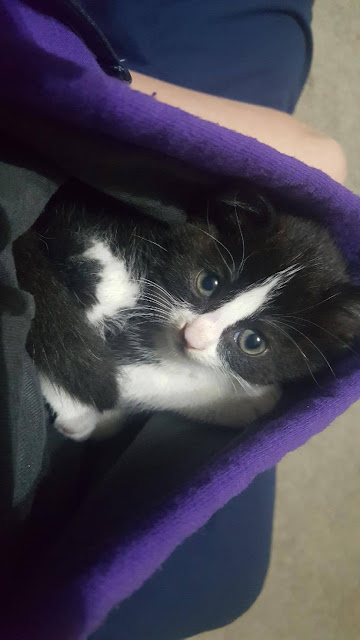 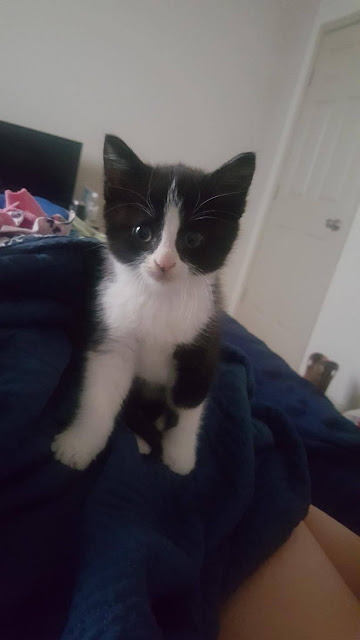 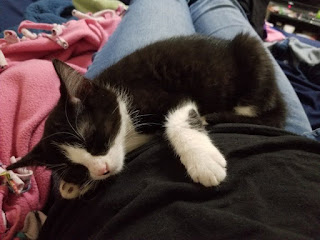 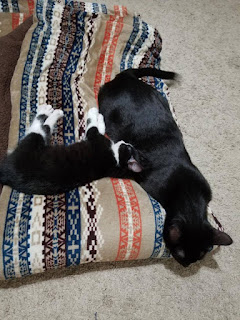 Moral of the story: Sometimes God will suddenly pick you up and completely re-arrange your life. You may hate it, you may be terrified, and even fight the changes. But, it could be completely for your highest good, to put you in a better place. 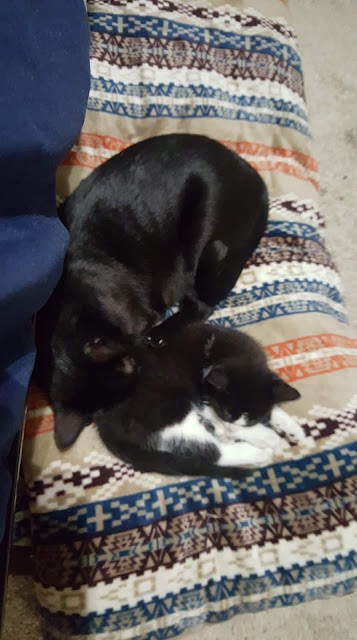 
Posted by http://mandelynreese.blogspot.com/ at 10:03 PM