Lately, I'm finding myself wanting more time away from my cell phone. At the gym recently, I decided to not have my cell phone strapped to my body, and I got in a much better workout, because I could focus instead of being distracted by an almost constant flow of text messages and Facebook alerts.

I'm noticing more annoyance building up in me when I'm trying to spend some quality time with someone, and their cell phone, as well as mine, keeps beeping, dinging, and ringing. We are bombarded by so many alerts from our cell phones now-a-days, that we're losing some special moments. I don't think people realize how much stress this constant bombardment can put on us. Because people know we have cell phones and are on them all the time, they get pissed off if you don't respond to them within a certain amount of time.

It's interesting, because cell phones allow us to be more in touch with more people more often, but the drawback is lack of privacy and distraction from who's in your presence hoping for your time in-person.

I got together with one of my friends recently that I hadn't seen in-person is a long time, and she kept getting on her cell phone so much while I was trying to talk to her, that I actually got sad. I yearned for us to be able to chat and laugh like we used to, without constantly looking down to text or take calls.

I know I do it too, but I have made efforts to be more cognizant of how much I'm on my cell phone when I'm trying to give someone my attention face-to-face. I have gotten a lot better about putting my cell on silent, or only pulling it out when I need to look something up or take a photo. Then I put it back in my purse.

So much now our communication is dominated by some kind of gadgets and technology. A lot of important facets of communication are lost from using only texting or email to talk to someone. You miss out on the tone of voice and body language, that only in-person talks can give you. Tone of voice and body language are pretty vital to better understand what a person is saying to you.

It's crazy to see how much cell phones have taken over. They're quite useful, but when people are totally focused on their cell phones, they're missing out on everything else around them. When I was downtown recently for a few events dressed in my angel attire, I was shocked at how many people were walking around staring at their cell phones, and everyone taking photos and video on their phones. It's like, an epidemic. It's cool to record and document our lives, but....nothing is really private. Anyone can hack your stuff.

I've had my cell phone hacked already....pretty much as soon as I got semi-famous doing the Angel Project, someone hacked my phone. So I know that someone out there has accessed all my personal stuff and photos... Same thing happened to Paris Hilton. So if anyone ever stumbles across a scandalous photo of me.....yeah... my cell got hacked!! I rarely take "scandalous" photos, but I did have a few! BEWARE of what you store on your cell phone people! Realize that your privacy in this new age of technology is an illusion.

Next time you're enjoying time with friends, make a concerted effort to reduce the amount of time you're staring at your cell phone. Take some group pics and put it away! 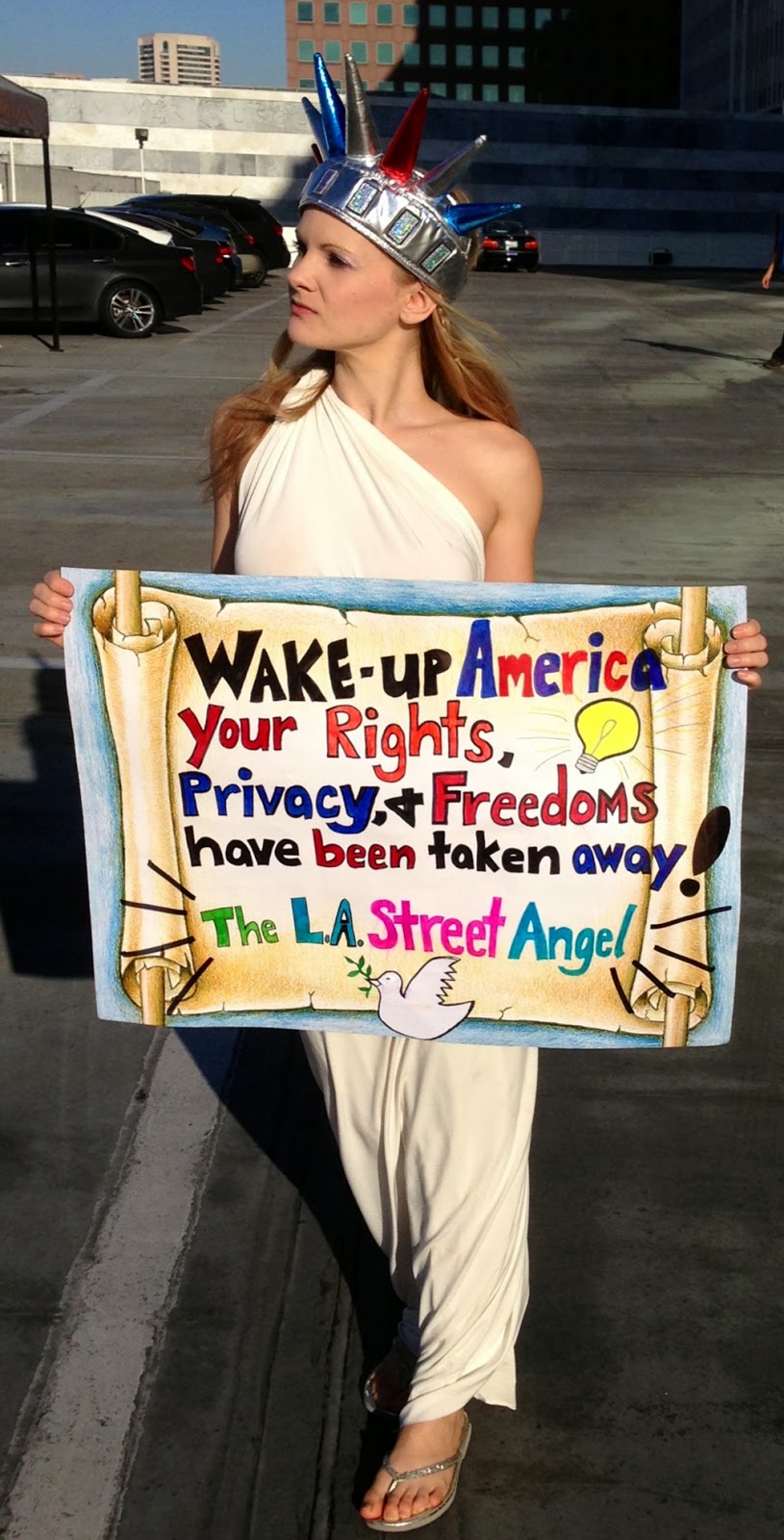 The universe has a way of being so incredibly mysterious, and does answer your prayers and wishes in its own way. The only thing is, sometimes it may take a lot of time to come about.

Case in point: Back in 2003, I went to PetsMart to look at all the animals. I would just randomly go there sometimes to be around the animals because I liked doing that. I really wanted a cat, but wasn't allowed to have one because I was living with my Dad and Step-mom at the time, and they'd made me get rid of my cat because my Step-mom was pregnant. I had to take my orange kitty, Oliver, to an adoption shelter to have him re-homed. It was sad, because I'd raised him since he was a kitten. While I was at PetsMart that day, I was looking at the cats, and noticed a pair of cats sharing 1 cage. One cat had a white head and grey body, and the other cat was a huge fluffy furball, striped brown with green eyes. The fluffy cat looked like the most loving, sweet cat I'd ever seen. She was purring loudly, rubbing her face all over the cage, and then she flipped over on her back and was pawing in the air while still purring loudly at me. I looked longingly at the fluffy cat, and wished so much that I could buy her. While I was standing there, another family saw her, and right in front of me they decided to adopt both of the cats because they came as a pair apparently.

Fast forward to December 2013, I was moving into my new place with roommates, and was surprised to find out there were 4 cats and 2 dogs in the residence that I wasn't told about. However, upon closer inspection of the cats, I realized that two of the cats were the ones I saw from that trip to Petsmart back in 2003! I was in total shock. That is a major synchronicity. The fluffy cat's name is Baby, and the white/grey cat is Molly. The universe conspired and gave me my wish to be with the fluffy sweet cat, but I didn't get the wish until like 10 years later!!! What are the odds?!

Video of purring kitty!
~Mandelyn Reese
1/7/14
Posted by http://mandelynreese.blogspot.com/ at 12:38 PM No comments: