At one point, JC handed me a deck of cards called "Messages from your animal spirit guides" and told me to pick a card. I had never seen that kind of deck before and was intrigued. 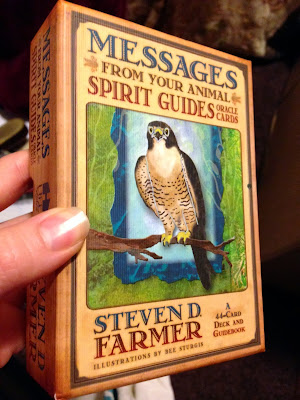 When I drew my card, JC looked shocked. He said he'd never seen the card I'd drawn before. He examined it, then asked his roommate CB if he'd ever seen the card before, and CB said no. JC continued to look amazed, and he told me that both he and CB had been using the deck almost daily for a few months and never had seen the card before. The card I drew was the "Kiwi", which ordered me to do a walking meditation. 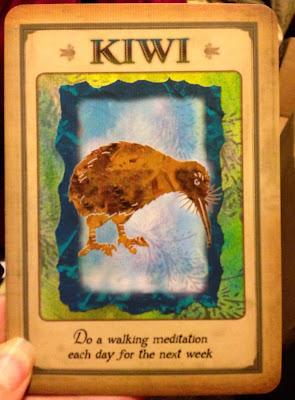 I figured since it seemed like a big deal that I drew that card, I had better take heed of the advice, so I planned to do a walking-meditation.

Two days later on 4/23/13, I went to a park. It was mainly a sports park: it had a baseball field and a soccer area. There wasn't much privacy, but I figured it was the best I could do in the area I was at. Instead of doing my walking meditation through the park itself where people where noisily playing games, I decided to walk down a dirt path that was in front of the park. I put my purse in the trunk so I wouldn't have to be lugging it along with me, and I set out on my trek.

As I strolled slowly along the dirt path, I came upon a dirty, abandoned glove. Upon finding it, I realized it was in the position of the sign language for "I Love You". I wanted to take a photo of the glove, but I had left my purse in the trunk of my car which contained my cell phone that I usually take photos with. I turned around and walked back to my car to retrieve my cell phone.

On my way back on the path with the intention to take a photo of the glove, I suddenly stopped dead in my tracks...There on the ground in front of me was a rock that was in the perfect shape of a heart!! I'd never seen a rock so well shaped like that. I snapped a photo of it using Instagram. 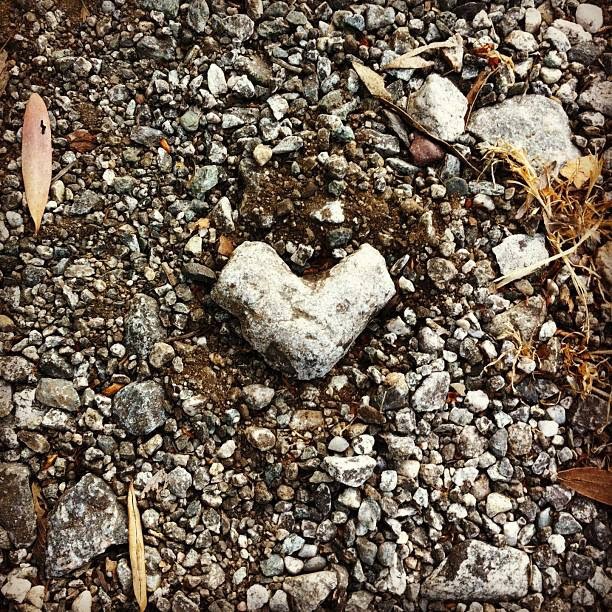 After I took the photo of the rock, I walked just like 2 steps forward while fumbling with the Instagram features to post the photo. Then I stopped and realized that I wanted to keep the rock. I turned around to grab the rock off the ground, but it wasn't there! I bent over and started looking around for the rock. No luck. I re-traced my steps and the pathway FIVE TIMES and the rock was no-where to be found. I decided it must have been a little mystery gift from the universe to show me the heart rock and let me get a photo of it, but it wasn't meant to be kept.

After I gave up my search for the heart rock, I went back to the glove, drew the word "Love" above the glove with a twig, and snapped the Instagram picture below: 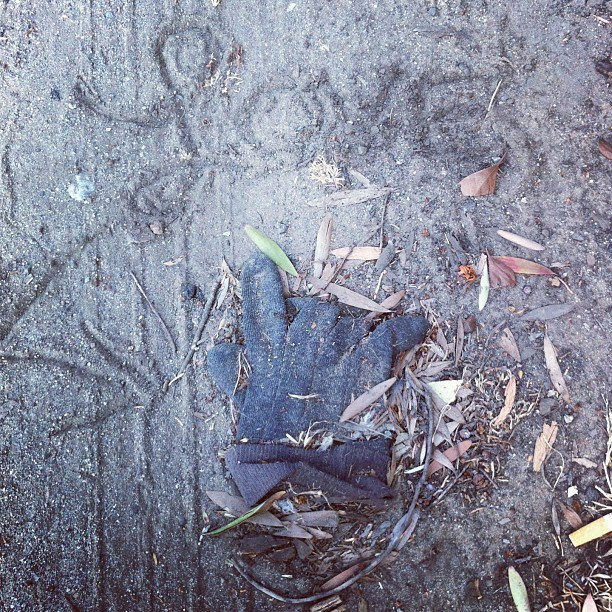 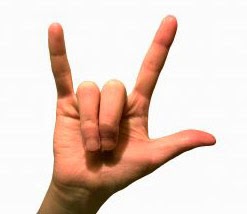 <---This gesture means "I Love you" in Sign Language

Four days later I became inspired to meditate on the topic of love, and wrote this journal entry below on 4/29/13: 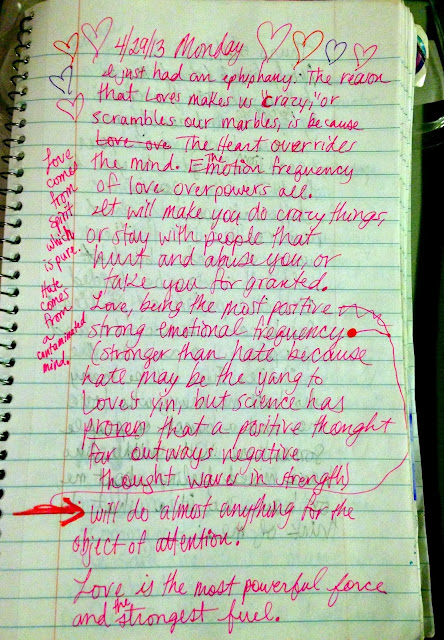 I thought this story about the Kiwi card, glove, and rock was pretty magical, so I wanted to share the story with you. ;) Keep an eye out for signs from the universe! Signs are all around. They could be on someone's t-shirt, or a license plate. Life is mysterious. <3


Posted by http://mandelynreese.blogspot.com/ at 10:52 PM No comments:

I grew up in San Antonio, TX where I was raised by a very Christian family. Since I was in diapers, I was in a non-denomenational church almost weekly with my family. I was into churches all the way up til I was age 21. There seemed to exist a stigma that I grew up around to stay away from anything remotely magical or clairvoyant etc... And as such, I never had any exposure to psychics, tarot, or astrology type stuff. Sure I'd read my horoscope now and then, but it wasn't until I moved to Los Angeles in 2012 did all of that change. Shortly after I got and initiated my calling as the street angel, more magical things began to happen to me. I have many more stories to share about crazy signs I've gotten along my journey, and here is one:

I remember one day I read my horoscope, and it told me that I would find something special at a thrift store. I thought that was an odd and specific thing for a horoscope to say. I was driving on my way to my very first photo shoot as the angel (to have images to put on my angel business cards I was planning to create), when suddenly it seemed like the photo shoot may be cancelled. Since I thought we were going to reschedule, I began to turn streets to go back home. On one of the streets I pulled onto, I ended up in front of a tiny, rustic thrift bookstore called "Curiosities and Oddities". The name intrigued me, and I felt pulled to go inside. I traipsed inside the door, and was overwhelmed: books were everywhere! Piled in all sorts of random ways and places, I didn't even know where to start. I didn't even need anything, but I felt like I had to check it out.

As I strolled around aimlessly, I was chit-chatting with the cashier girl, when something made me crank-shaft my neck to the left, and there on the shelf at eye-level, was a blue box that said, "Messages from your Angels". There I was, having just started dressing like an Angel and wandering the streets of LA, on my way to an Angel photo shoot, and I am face to face with a box that says Messages from your Angels. I knew in that instant, that I had to buy them, that angels wanted me to see those. I grabbed the box and examined it. They were "Oracle Cards". I'd never heard of oracle cards before. I'd never even messed with any kinds of cards other than playing  Rummy, War, and Poker with my family using traditional playing cards. The angel cards were marked $10. 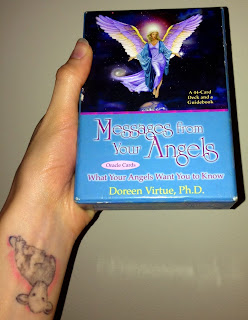 The box of Angel cards
I bought them, and took the box with me in my purse to visit the Self-Realization Gardens, which is such a beautiful, magical place teaming with lush life!! It has more unique foliage and flowers in one place than I've ever seen in my life. It even has a big pond full of fish, ducks, and a pair of beautiful swans beneath a cabin and windmill.
Photos I took with my personal camera at the gardens: 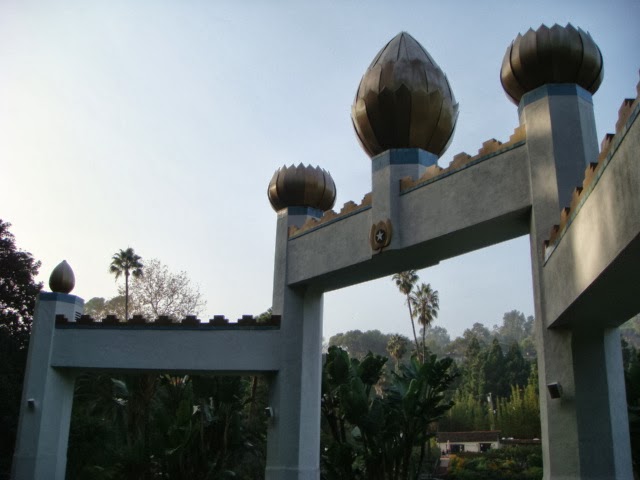 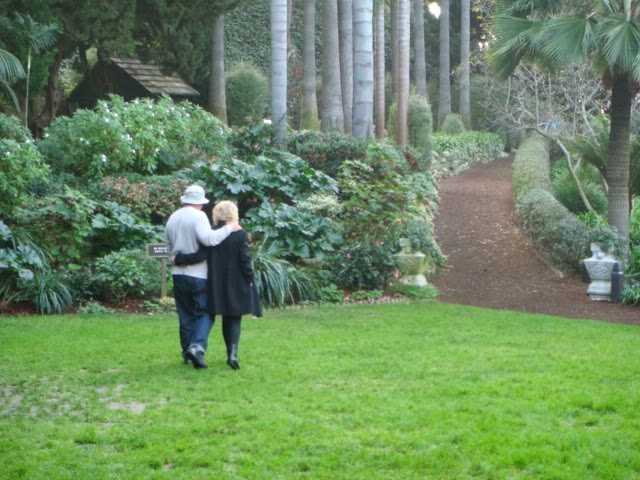 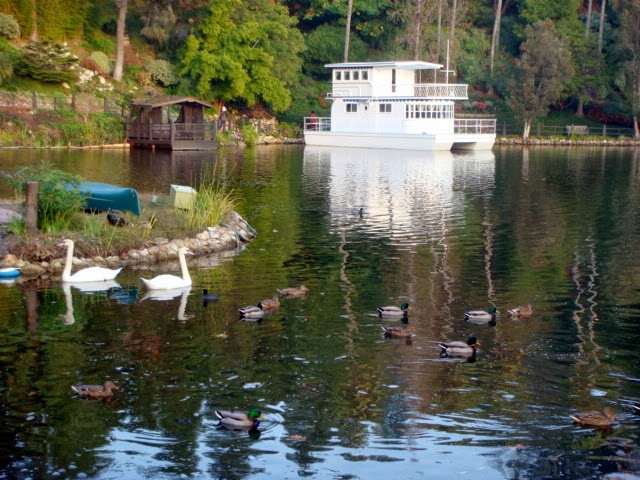 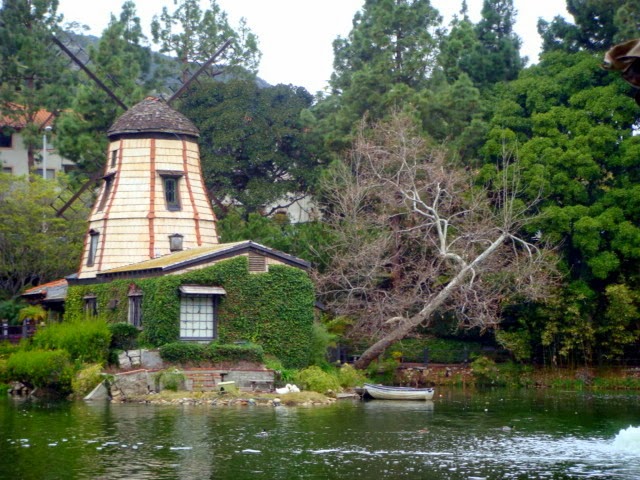 ----------------
Inside the cabin is a meditation area that is so peaceful. You can just go in and sit there. On the wall in front of all the chairs are photos of some of the great Ascended Masters: Jesus Christ, Ghandi, and Paramahansa Yogananda. It seemed like they were all eerily staring at me LOL. When I grabbed my cell phone, the time amazed me: 3:33pm. If you look up the meanings of Angel Numbers, 333 is an epic number that means Ascended Masters are nearby helping you. Something told me to pull an Angel Card at that moment, so I did, and low and behold, this was the card I drew that was awesome: 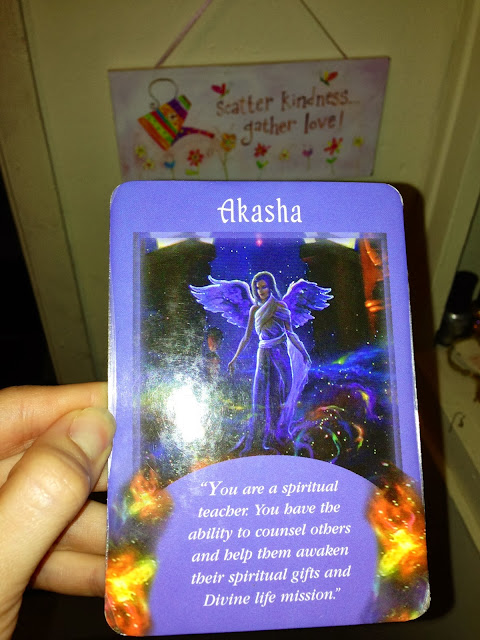 It was a cool series of events that felt like a big sign to me about my life purpose. The Angel Cards have truly been a blessing to my life, as well as to those I've given angel card readings to. They shock people all the time with their accuracy and have brought 3 grown men to tears during their readings.

If you don't believe in this stuff, all I can say is that I encourage you to open your mind, because magical things do happen in life!
Check out my video about "Signs and Synchronicities"