Encounters with Negative Nancies & the Dark Side

In case you don't know what a "Negative Nancy" is, it's just a term for someone who is very negative in their views and opinions. They may be accompanied with a cloud of bad energy and tend to put other people in a bad mood. Urban dictionary says that a Negative Nancy is "Someone who is constantly a downer and has a negative influence on others."

I had someone tell me once that "Wherever there is light, there is also dark." That quote always has stood out to me, because she was so right. Regardless of how light, kind, and positive I usually am as a person in general, I've still had some encounters with the Dark Side during my Angel Project.

Negative Nancy #1: A friend of mine invited me to a small business convention in downtown LA. We rode together, and it actually turned out to be a pretty huge event. The cool thing about it was that most of the people there were in business suits and professional attire. So I, with my long white wrap dress and big angel wings, stood out like a sore thumb. (Wait, I usually stand out anyway haha) As I was strolling around the event, two nice ladies came up to me and were talking with me about what I was doing. As I explained to them about my Angel Project, suddenly a short, overweight, black & grey-haired woman came up and began circling around me with this cloud of negative energy and began to berate me! In a really negative tone of voice, she asked me what I was doing there and why was I "wearing that" (my angel outfit). I tried nicely to explain to her what I was all about and that I promoted kindness and positive messages, but she began to criticize me. She even said she preferred to not be kind to people! She topped off the barage of negativity with this random statement: "You'd get torn up on skid row if you go there wearing that!" I had my floor-length white Jesus-style dress on, so I was rather puzzled by that statement. One of the nice ladies I had been talking with actually got in-between me and the Negative Nancy woman and told me to not engage with the woman. I tried to get away from the Negative Nancy by walking to another area, but she followed me and kept circling me, muttering negative things. Eventually we were able to lose her, but it sure was weird to have that happen! 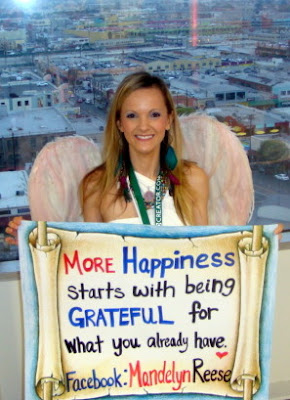 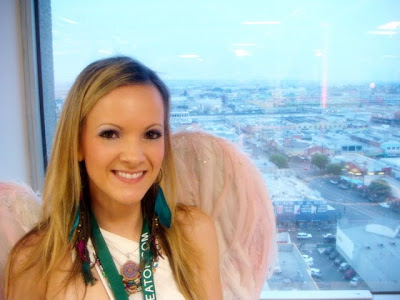 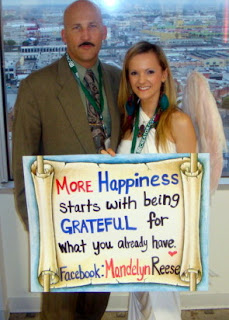 Negative Nancy #2: One day when I happened to have no evening plans, a female friend of mine from Hawaii called me up out of the blue and said she was in town to attend a huge event at the Hilton LAX: A visit from the living saint Amma. She is a world-renowned humanitarian that people come from all over to see. Everyone has to wait hours upon hours just to get a 5 second hug and blessing from her. (I arrived at the Hilton around 8pm and got a ticket to get a hug, but I didn't get to see her until around 10:30am the next morning! I slept part of the night in my car!) 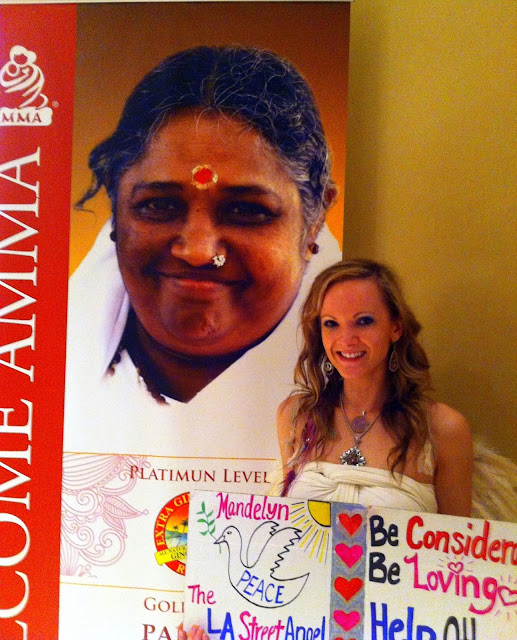 As I wandered around this packed event in my angel attire, an older woman (who actually very much resembled the Negative Nancy from the small business convention) came up to me and basically started to scold me, even though a guy was standing in front of me trying to photograph me holding my sign. She asked who let me in, and I told her that a security guard had already cleared me because my sign wasn't promoting anything (like a company or Facebook etc..) She began saying how I needed to reconsider being there doing what I was doing, and to her I was just "showing off". I was so dismayed by her statements and behavior, that I couldn't come up with any kind of rebuttal at the time. Luckily, the guy who'd been trying to take my photograph and had heard her berate me, told me, "Gosh sorry about that. She wasn't very nice!" He hugged me and apologized for the woman's mean behavior towards me. So that made me feel a lot better. Everyone else at the event seemed to receive me and my angel messages well. :) For the record: I am not doing this angel appearance to "show off". I am showing messages. I am using my prior experience as a promotional model to promote positive messages on my own time with no one paying me to do it.
--------------------------------------------------------------------------------------------------------

There have been so many times where I have really felt Divinely protected. I believe that I am, and will be until my Purpose is finished. :)

Posted by http://mandelynreese.blogspot.com/ at 10:01 PM 6 comments: