It's funny how you can be going along with your life, and all of the sudden a sweeping illness can just wipe you off your feet into unknown territory.

I hadn't been badly sick in a long time. Last time I could recount was a food poisoning barf session back in February 2014 following some questionable street tacos I ate, which obviously was a tough lesson learned.

I was at a goddess festival in Joshua Tree, California called ShaktiFest May 14-17, 2015, and as I was sitting in a spiritual workshop on that Saturday 5/16, I noticed I seemed to feel increasingly uncomfortable. My lower back and sides of my hips were aching worse than "usual". I kept trying to adjust my position on the floor to get more comfortable. As soon as the class was over, all I could think about was hauling ass to the hot tub near the dorms and soak my sore bones. I felt like I couldn't walk there fast enough across the desert festival. My lower body felt so sore it seemed almost like my legs could give out from under me and I wouldn't be able to walk any further, but somehow I made it back to my dorm and changed rapidly into my swimsuit.

I was happy I made it into the hot tub, then dismayed that a guy came and announced it'd be closing in 15 minutes. I just decided to enjoy it as thoroughly as possible for however much time I was gifted.

Once I left the hot tub and got back into my dorm, all I wanted to do was get in bed. I felt wiped out with body aches and fatigue. Suddenly, chills and goosebumps shot down and covered my entire body, and I had to put on extra layers of pajamas in a feeble attempt to keep warm. A girl who was staying in the dorm bed next to mine noticed I was in bed with my covers pulled up to my neck, and asked if I was ok. I told her I wasn't feeling very well and had chills. She touched my faced to check for fever, and exclaimed that yes, I felt very hot to her. She offered to get me some hot chai tea, and I said yes please! So she set off on the mission.

A friend of mine who was also attending the festival came to my bedside after I texted him letting him know I was in bed. Even though the place was technically co-ed and even had a bathroom labeled "Gentlemen" on it, it was generally recognized as more of a girls dorm area. All the beds in my dorm area were being used by ladies, so my friend entered rather incognito with a hoodie over his head, which was good because he walked right passed a naked girl who was changing out of her swimsuit. I told him how I was feeling, and he began to rub my back for me, trying to ease my pain. Although his efforts didn't take it away completely, it felt helpful, healing, and distracted me from the intensity of my discomfort. I was so grateful for his presence as a friend at my side, caring about what I was going through.

It wasn't long before my stomach gave me the tell-tale signal that I had better get to the bathroom and prepare to launch. I tried to make a little nest around the toilet with some towels, but there just isn't much you can really do to make blowing chunks into a toilet a more enjoyable experience. There is something uniquely humbling about having to hug a toilet and hang your head down into where people's butts have been. Just the thought of having my face down into the vicinity of where a bunch of people's butts had been shitting was enough to get the process started. It wasn't a pretty sight, but after my first expellation I did feel somewhat better. But it was only fleeting. I had many trips to the bathroom. I spewed until I had nothing left to spew, and yet my stomach kept on trying. I got so worn out having to make the trip from my bed to the bathroom, that eventually I just camped out on the bathroom floor, sometimes laying starfished all sprawled out. I didn't even care what others thought of me at that point, I was so sick.

I prayed for help, I prayed for healing, I prayed for forgiveness. I felt so awful, I felt like I was going to die. I heavily considered going to the hospital. Two things that held me back were that I was told the festival doctor would be coming to see me, and the other thing is still not having health insurance. My last visit to the ER left a disdain for the medical field.

My body aches got so severe, it felt like my whole spine was going haywire and into shock. My nervous system was freaking out. My hands, arms, and whole legs were tingling and having waves of numbness. Then my hands would freeze into temporary paralysis. My friend who was witness all this kept saying it seemed like I was going through a butterfly-cocoon transformation, and purging a lot of lower energy emotions. Two other ladies appeared and helped me get through the worst of it. They were strangers to each other, and to me, but they were my angels. They held me, massaged me, rubbed essential oils on me, hugged me, helped me walk, would tuck me into bed, encourage me, and generally saved my life that night. I don't know what I would have done without them. I feel eternally grateful for their unconditional love and assistance. And one of them I don't even remember her name. I was blessed by their presence and help. The intensity of the sickness started about 7:30pm I think and ended around 1:40am. The doctor never did come to see me, to everyone's dismay, but luckily I had other angels around that helped me get through it.

I had some moments where I wondered if I would die from the illness. I couldn't imaging it getting any worse, or I'd die or go unconscious. While part of me thought it would suck to die this way, there was another interesting part of me that was okay with it. I would be okay with the process of life and death, and if it would have been my time to die in that way at that time, then I would have just had to accept that. I may seem young to many of you reading this, but I feel like I have lived a very fulfilling life. I have gotten to go many wonderful places, been to many amazing events, met so many incredible people and made tons of beautiful memories. I did my best to help a lot of people, I put out positive messages, I pushed myself to limits I didn't know I had, and showed more courage than I knew I possessed. I was satisfied with my life, experiences, and accomplishments thus far. Sure I still have unfulfilled wishes and desires, but I feel like I have lived well.

I don't live like many other people live, I live one day at a time. I try to see the beauty in things that many others may overlook. I stop and smell the beautiful flowers and appreciate the divine creation they are, and marvel at how they came to be and unfold so majestically. I honor the energy and power of the mountains, and marvel what caused them to come into creation.

There are so many things our minds are not yet developed or open enough to comprehend, but having the respect and awareness of that is a good start.

Namaste, {The light in me, the divine spark, acknowledges the light and divine spark in you}
~Mandelyn Reese
The LA Street Angel
5/25/15 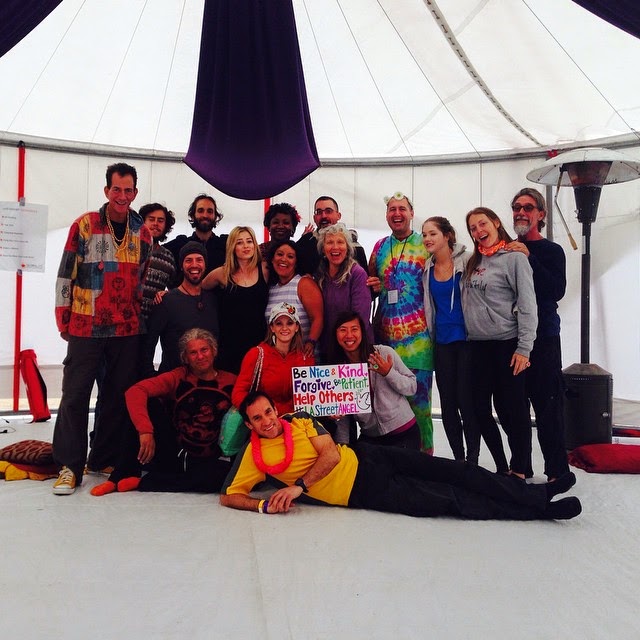 At the ShaktiFest, just a few hours before the sickness hit me. 5/16/15
Posted by http://mandelynreese.blogspot.com/ at 2:11 PM 1 comment: