Someone Who Changes You

Have you ever heard that saying, "Find or be with someone who doesn't try to change you"? Well I call BS. Relationships change us, they cause alchemy within us. We, and everything else, are in constant evolution. Even rocks evolve! Hardly anything stays the same for long. Two people married for an entire lifetime will see their bodies and lives change constantly around them. Love, and effort, are what hold people together over time. But even love, especially romantic love, shapeshifts and changes form within a relationship. Have you ever known two people who looked so happy and doing well to suddenly end up hating each other and breaking up or getting a divorce? Public photos that couples may post can be deceiving for what is actually going on within the relationship behind closed doors.

Romantic love changes us, whether the person openly tries to change the other person or it's done subtly. Sometimes changes to the individuals within a romantic partnership happen very gradually over time. A person can change so much from their experience in a romantic relationship, that by the time they're deep into one, they're nothing like the person they were before.

Romantic love can make us better people too, it all depends on the two people involved and the progression of the relationship. Each relationship is a completely unique entity, because each of us are individual unique souls and creations.

People try to cling and hold onto someone, because they fear losing them, or fear potential changes. No matter what you do, all relationships will "end" at some point, because leaving the body in death is inevitable. Even people who get married just once and stay with their one same mate for their entire lifetime, will eventually die.

If you watch the movie "Lucy", they say that if you speed up something infinitely fast, it disappears...that it is time, time that defines us. A time we hold for awhile in some sort of space in this universe or galaxy. I can go on and seemingly make no sense of life and the mysteries of the universe. I wish my mind could understand even more. Maybe the more wisdom that comes, the more life becomes easier to navigate, and make more sense. With all of that being said, are we just meant to have an endless amount of relationships and experiences within our consciousness? Are we just souls flitting around like butterflies, getting to grace each other's lives for a time, then moving along to whatever is next in our future?

You can feel abundantly sad over the fact that people grow old, people get sick, loved ones die, and relationships end...or you can just learn to appreciate each day. You can feel abundantly sad over romantic love changing or fading, or you can just get stronger, adapt better, and accept times of release, change, and transition. I'm not sure there is any avoiding it for long. Be grateful for whatever you have, when you have it. And when it leaves your hands, be grateful you had it, had the experience, had the love...and be open to whatever is coming next. 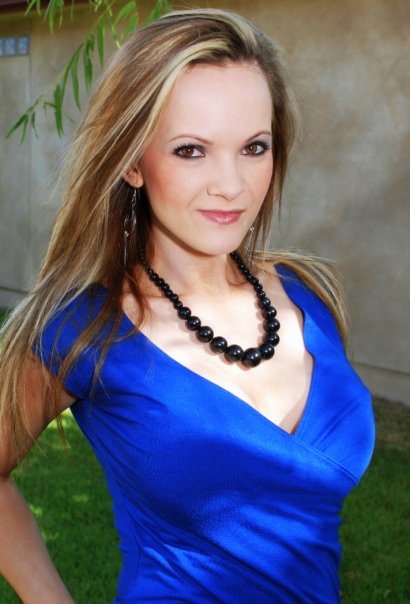 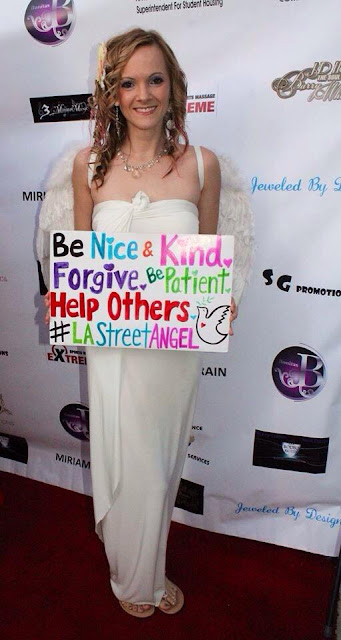 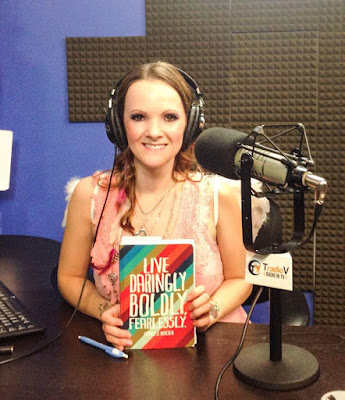 Posted by http://mandelynreese.blogspot.com/ at 11:41 PM No comments:

I settled myself as comfortably as I could into my seat on the airplane. I was about to fly from my hometown of San Antonio to my home of Los Angeles after my holiday trip to be with family over Christmas and New Year's. I said a little prayer to the Universe to please have it be a safe flight with smooth takeoff and landing.

After a wonderfully smooth takeoff, I decided to pull out a book I'd purchased just before Thanksgiving: Imagine Heaven, by John Burke. Something about it had given me the impulse to buy it. I hadn't read much of it, but what I had read so far was fascinating and definitely made sense to me, based on my past experiences. {Read my entry about Meeting God} 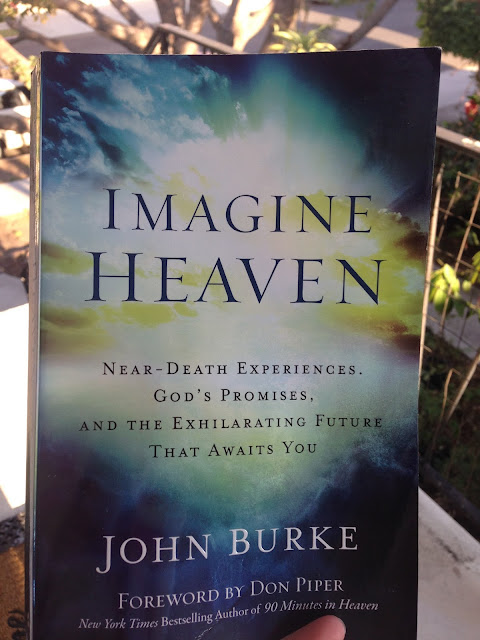 I only read about 4 pages from where I'd left off, before I put the book away, curled up in a blanket, and took a rest against the window. But one of the passages from the book that I remembered due to it's uniqueness stuck with me, and would become so much more significant within just a few short hours. 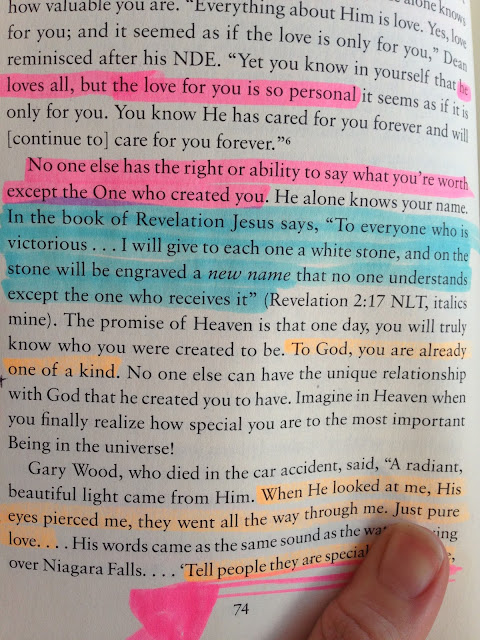 "To everyone who is victorious...I will give to each one a white stone, and on the stone will be engraved a new name, that no one understands except the one who receives it." Revelation 2:17 NLT

My friend was kind enough to pick me up from the airport and take me home. I took some of my things and headed up the stairs to unlock my apartment.

Upon reaching the door to my apartment, there, hanging ever so delicately from my door knob, was a tiny velvet bag, light-blue in color. I carefully removed the sachel from my doorknob, and entered my apartment to examine it further. There was no wording on the velvet bag, and no mention of who it was from. I opened the drawstrings, and found soft white tissue. I gently unwrapped the tissue, revealing a beautiful white stone, and upon it's surface, a lotus flower was beautifully engraved.... 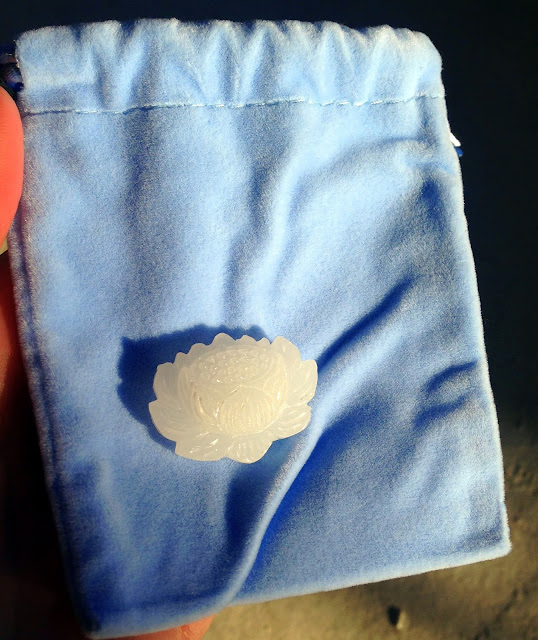 A lotus flower....often used in the spiritual realm to describe the struggle of the soul through challenges and hardships, unfolding into a graceful elegant bloom from the depths of murky waters.
Ironically, it's a flower that, if I ever chose to get more tattoos, I wanted inked on my lower back with flowing petals near my root chakra, to represent the progressive growth and awakening up my spine along my other chakras, to a more beautiful higher conscious being.

I was overwhelmed with awe at this finding. To me it was more solid proof that there is massive mystery to the Universe and God. That all my research lately into Heaven and spirituality is pointing to a still undefined truth.... There is so much more to life than so many other people realize. If only they could become more conscious of it.

I busied myself settling in after my long trip. I began to unpack a few things, all the while thinking deeply about the white stone and the quote I'd just read in the book. I felt dumbfounded with gratitude. My efforts are being acknowledged by realms and dimensions I still don't fully understand.

Then, there was a knock at my door. It was a Fed Ex guy, holding a rather large box. I accepted it and examined the label. It was from one of my bestest longtime friends who lives in Dallas. I had no idea she was going to send me something. I grabbed my scissors and cut open the slits of the box, then dug through all the wrapping inside to reveal an ever-so-special second surprise within just minutes from the stone discovery. An angel teddy bear. I almost couldn't believe my eyes. I lifted the teddy bear's tshirt to find the tag, and upon seeing the words, "Build A Bear", I burst into tears.
You see, on my flight to San Antonio for Christmas, I had secretly thought in my heart and mind to myself how cool it would be to be like a kid and take myself to the Build-A-Bear store and buy a cute teddy bear. But I hadn't told a soul. In fact, I'd forgotten all about the fact that I'd thought it to myself just 2 weeks earlier. My friend Tiff, who is like a second sister to me, had sent me a secret Christmas wish. I immediately called her and left her a message to thank her. 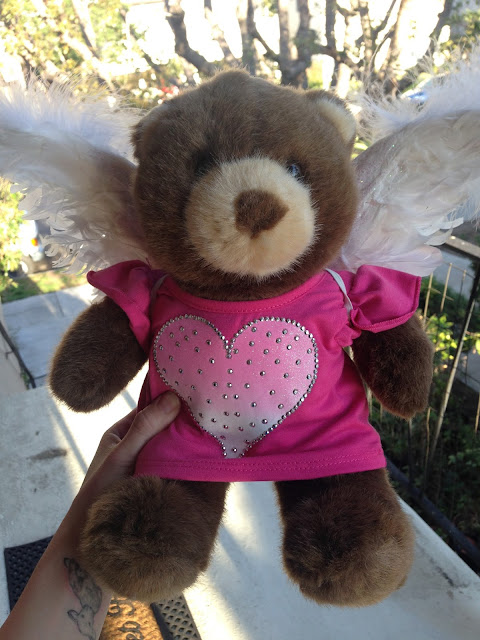 Life and the Universe are mysterious. You CAN manifest the things you want, even secret desires. You never know WHEN (or if) they'll arrive, but when they do, it's surely an overwhelming happy time, knowing that the universe responded to your call.

Watch my LIVE talk shows at 1pm PDT on January 7th & 21st on TradioV.com (or watch the show later on the website if you can't watch it live) to see more on these stories and tips on manifesting your wants and needs.

Posted by http://mandelynreese.blogspot.com/ at 5:44 PM No comments: