I would like to share a story that is very special to me. I thought about keeping it private, but I think it would be good to share with others because to ME, it's proof that God is different from what many religions preach.

I have been inducted into the Modern Mystery School, aka The Brotherhood and Sisterhood of Light. It may sound weird, but it's been around since the time of King Solomon and Christ. Their classes are very spiritually deep, eye-opening, and sacred. They used to be a closed, secretive school until they decided to be more public with the coming of the New Age.  One of their classes I took was called "Astral Travel". It was a guided meditation to take you to a higher spiritual place, with the goal of getting to see the "Akashic Records". Before being introduced to the school, I had never heard of Akashic Records or Astral Travel stuff. I wasn't sure what to think of the class when I signed up, but I'm glad I took it. Once we got into the meditation, this is what I experienced:

I shot up into the Heavens and landed on top of a sea of white clouds. I spiritually called out if anyone was around to take me to the Akashic Records. Suddenly, an ethereal blurry large blue hand appeared beside me, took me by the hand, and started to lead me along. The next thing I saw, was what looked like a sunrise over a sprawling maze of records as far as the eye could see! It was like a library of sorts, but I couldn't see all the detail, just rows and swirls of records all basked in golden sunlight.

The next thing I remember, is that God himself appeared before me in a large human form. He had a LONG white beard that reached down past his torso, and was dressed like a knight, except his mesh metal suit spanned far behind him like a wedding dress train. The front of his outfit looked like soft red King's robes with fuzzy white trim, almost like Santa Claus's red outfit. I remember saying, "Dad?" He smiled at me, and told me that he took this form so that I could see him. He then sat down on a huge throne, and he picked me up and put me on his knee (like some fathers do with their children). He began to stroke the top of my head lovingly, and he said to me, "You are loved unconditionally here. You have nothing to fear."

--That is all I remember--
The only thing I remember after that was being led out of the meditation and back to reality in the classroom. I had tears streaming down my face and a sense of immense relief that I was loved unconditionally. It's a sense of peace that is hard to find in this world.

(This photo was the best example I could find of what I saw him wearing in terms of his knight headwear and mesh metal train behind him, but without a sword) 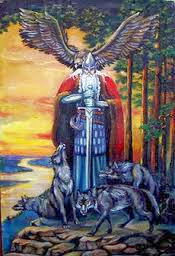 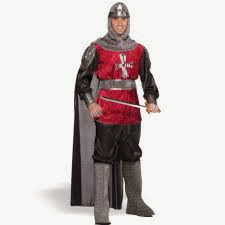 It was a really beautiful and amazing experience to have, and I'm so happy that I had it.

So, whenever you feel really down on yourself and unworthy for whatever "mistakes" you have done in life, remember, you are loved and accepted unconditionally on the higher planes. In the soul journey, mistakes are just lessons that you {hopefully} learn from.

Posted by http://mandelynreese.blogspot.com/ at 10:36 AM No comments: